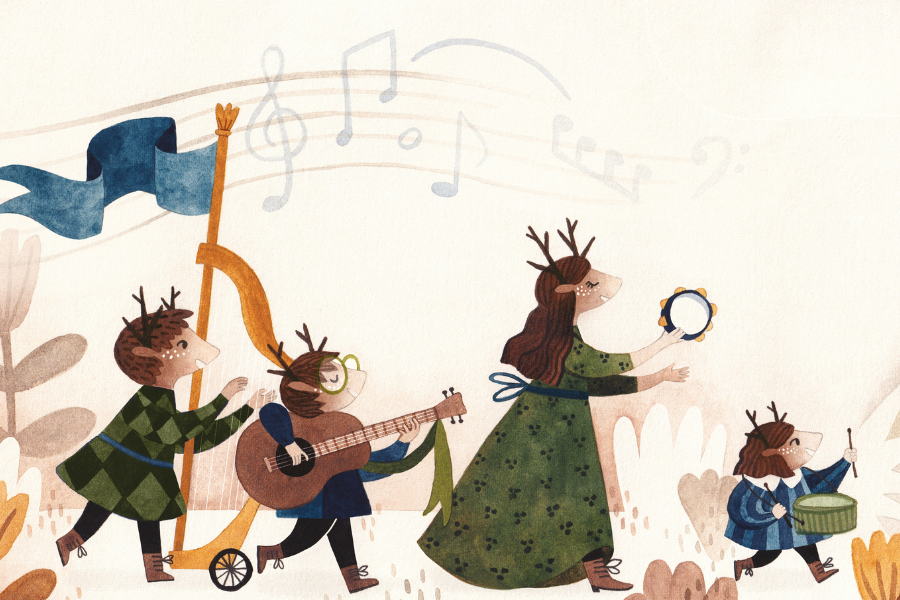 First published in French, A Picnic in the Sun, chronicles the musical adventures of Bertie and gang, who never get bored with each other—except for the time that it rained for four straight weeks! That’s when they decide to repair an old boat and head for dryer lands, a sunny place atop the Blue Mountain. Acclaimed Quebec author, Christiane Duchesne, shares the inspiration behind her song-filled tale and its companion story, Une fête sous la lune.

Where did you get the idea for A Picnic in the Sun (Un Pique-nique au soliel) and Une fête sous la lune?

Let’s just say that it’s a project that was done in reverse. I had written the songs for both albums about 10 years ago, with no idea that they would be turned into a two-part story. I was looking for the perfect musician to compose the music, and I wanted it to be Jérôme Minière. But at that time, Jérôme was very busy, so I decided to wait.

When the lyrics found their music, we submitted the project to Roland Stringer, The Secret Mountain’s publisher. Obviously, there were too many songs for an album. That’s when he came up with the idea of doing two books and linking the songs to a story.

So the two stories came long after the songs. It’s a completely inverted form of writing. Bertie and friends were already in the first song, so I decided to create adventures for them—an outward journey and a return toward something that was at first blurry, but quickly took shape like a mountain of dreams.

So the two stories developed as a framework where I could intersperse each song and create a new order of things. It was a particular pleasure to find the place for each one, to create and organize the sequence of the songs, to invent as we went along, and to craft a story as a backdrop on which the songs could somehow find a new meaning.

Bertie and his friends are inseparable! What role does friendship play in these adventures?

Friendship is very important to me, especially the relationships between individuals, big or small. Friendship requires trust, complicity, mutual aid, all of which are essential values that children share at a very young age and in a spontaneous way.

If Blue Mountain were a real place, where would it be?

Probably Mont Saint-Joseph in the Baie-des-Chaleurs, behind Maria and Carleton-sur-Mer.

Do you read your stories to your grandchildren? How do they inspire your work?

It’s their parents who read my books to them! I make up stories for them on demand, as I did with my sons throughout their childhoods. Afterward, they were able to read on their own. Of course, I often suggest my writing projects to them, and since they are now grown up, they gladly offer to be first readers and give me their comments and suggestions. The youngest is only three, so his turn will come one day…

What would you like readers to take away from A Picnic in the Sun (Un Pique-nique au soliel) and Une fête sous la lune?

I think it’s very difficult to wish for something like that. I’m always amazed at how an album, novel, or song can touch and move someone, or make a child laugh. The same goes for my adult readers. You can never predict the impact of what you write. It’s like throwing a bunch of balloons in the air and never predicting who will catch them.

What I remember from the feedback I received from parents whose children have listened to the two albums—and especially those who have listened a thousand times!!!—is that they are effective since the little ones can very quickly sing the songs by heart.

There is a joyful side to these two albums that makes it fun for the children to sing along. Parents unanimously agree that these are albums are essential listening for long car rides. It puts everyone in a good mood and you can drive for miles and miles in joy!

A Picnic in the Sun is out on September 1, 2021. The French version of the story, Un Pique-nique au soliel, and its companion story Une fête sous la lune are available now.

ABOUT CHRISTIANE DUCHESNE: Christiane Duchesne is the author of more than 80 children’s books. She is a two-time winner of the Governor General’s Literary Award and was a finalist for the Christian Andersen Award.