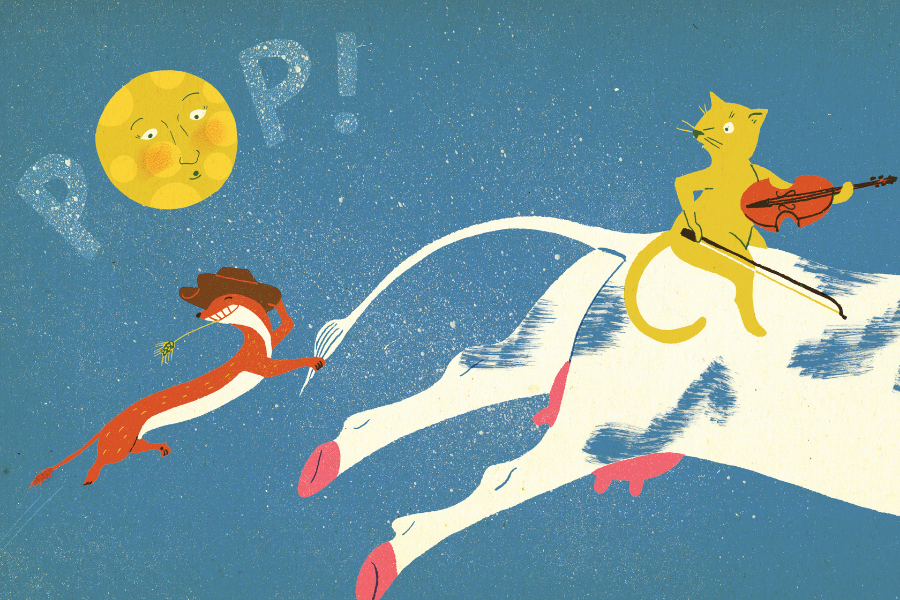 Most children’s book illustrators just have words to work with when they create artwork. At The Secret Mountain, they also have music. Montreal-based illustrator Sophie Casson takes us behind the scenes of her art process on Sing Out! Six Classic Folk Songs for Tomorrow and shares how she brought the songs to life.

Were you familiar with the songs in Sing Out! when you started the project?

Although I come from a French-speaking family, I went to an English school in Montreal. I used to sing songs like “Pop Goes the Weasel” and “She’ll Be Coming ‘Round the Mountain” at the top of my lungs in class. I would get a little carried away.

What materials did you use to create the artwork?

I use China Ink with brushes and stencil with oil pencil to create textures. This gives more depth to my illustrations. I love finding the right line, cross-cross, stripe, or checker to create the feeling I’m looking for. Then I create the final art in Photoshop. I really enjoyed creating mountains that look like ice cream for “She’ll Be Coming ‘Round the Mountain.”

How did music influence your illustrations?

The rhythms were in my head in a “pom-papum-pa-da-da-dum” kind of way while I was creating the book, which helped me establish the rhythm of page-turning.

I needed to draw many horses to capture the right energy for the six horses in “She’ll Be Coming ‘Round the Mountain.” I wanted them to be wild. I used paper and brushes that I bought on a trip to Taiwan to create the images you see in the video. I kept the manes and tails from my ink drawings to make the final art.

Sing Out! is a collection of well-known folk songs and characters. What was it like to bring them to life?

I had so much fun trying to figure out what the little dog who belongs to the old man from “This Old Man” should look like. He appears in the illustrations for three of the songs like a sidekick accompanying his owner on crazy adventures. I wanted him to be a cute pocket-sized dog with a lot of personality.

Sing Out! Six Classic Folk Songs for Tomorrow is available now. And it’s already caught the eye of reviewers. “In the pages of Sing Out! folk songs… take on lives of their own, becoming standalone stories featuring several zany characters,” said Midwest Review. “Nearly everyone seems to be having a good time, and so will readers and listeners,” said Kirkus Reviews.

ABOUT SOPHIE CASSON: Casson is an award-winning illustrator based in Montreal. In 2011, she was a finalist for the Governor General’s Award and has earned numerous distinctions in Canada, England, and the United States. Her illustrations have appeared in publications such as The New York Times, Financial Times, and The Globe and Mail and exhibits at World Design Capital events in Taipei and Paris, and the Canadian Museum for Human Rights, among others. See more of her work at sophiecasson.com.

Posted in Uncategorized.
Share
PreviousBehind the Artwork of Music All Around With Lucía Cobo
NextWatch TSM at the Children’s Africana Book Awards
Cart Close